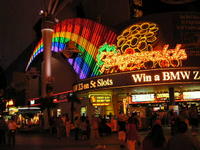 Las Vegas is the quintessential American city. The ruggedly independent spirit, the bare-naked capitalism, the seamy underbelly and the selling of dreams--everything that is good and bad in this country comes together (and amazingly, coexists) in that town. I am inclined to take all my vacations, and possibly retire, there. Also, I am a degenerate gambler.

All you have to do is fly, or drive, into town. From miles away, one can easily see the astonishing collection of capital expenditure. Even from a distance, the scale of the resorts is impressive. Driving down the Strip, it is ridiculous. Billion-dollar developments line both sides of the boulevard, each more extravagant in its turn. Spend a little time reflecting on each one, the cost of the physical plant, the expenses of thousands of employees, and soon an old saying occurs to you; the one about how these places weren't built on winners. Another rubric, that gambling losses are just "the cost of entertainment", implies that the 35 million people who visit Vegas annually are entertained mightily, indeed.

I don't stay on the Strip anymore. For sightseeing, fine dining, nightlife, and theatrical entertainment, it has no equal on this planet. The gambling, however, stinks. I won't bore the reader with myriad technical details; just trust me when I tell you that gambling virtually everywhere else in Vegas is a better deal, mathematically, than the Strip. I now play downtown, in old Vegas, on Fremont Street. There, fifteen smaller casinos crowd into four blocks, which make a quick change of scenery, or vibe, or game much more practical.


Sunday night. My flight out on Southwest was delayed twice, for over an hour. Damn hurricanes. Finally I boarded, and was fortunate to get a seat without anyone next to me. The pilot made up some of the time, but I still didn't get checked into Fitzgerald's until almost 10 pm. My room on the 33rd floor was plain, but clean. The shower had plenty of pressure and hot water, and the shower head was high enough for me to stand up underneath. At 6'3", that is rare in a budget hotel.


Went downstairs and donated $57.50 the company's quarterly statement. Although I got $30.00 back in a later session, the overall vibe spooked me off the Fitz. At about four AM, I realized I had been awake for about twenty-two hours and crashed. Amazing, what the city does to your metabolism.

Monday morning, I staggered out of bed and rammed my toe into my shoe, which was up against the leg of the other bed. Helluva way to wake up. It turned purple by that evening, but I don't think it's broken, because I can move it now. At any rate, it didn't stop me from limping off to Ogden Street for low-limit blackjack and low-life people-watching.

At the Gold Spike, I bought in for $20 at a two-dollar table. I'm not sure if they have another kind. I was wearing ratty jeans and a nondescript, ill-fitting polo shirt, and I fit in pretty well. The ceiling is low, and the air is redolent of cigarette smoke and the stench of despair. Which actually makes it my kind of dive. I cashed out after an hour, up fifty cents, and moved on to El Cortez.

The El surprised me a little. It was much nicer than I had imagined, with high ceilings and none of the grimy patina of the Gold Spike. They had $3 tables, but I was hungry, so I wandered into Careful Kitty's Cafe. Don't let the name throw you off; the food was decent, and my sausage-and-eggs plate (with a huge slab of hash browns), drink and tax was $5.86. I didn't play there, but I will on my next trip.

Then I made the walk to the Western. I never felt threatened, but it was 1PM on a Monday, and I am a large dude with a quick, purposeful stride. I wouldn't try it at night, alone. Played a good $3 game for a while, observing the rich tapestry of humanity for which this place is justly famous. Lost $15 there, because I just wasn't getting the cards. I went back to my room, to elevate my toe for a while.

Monday night was a celebration of wretched excess, the kind of thing I go to Vegas expressly to perform. After a nice $75 win at the Plaza, I went to the Upper Deck restaurant at the Vegas Club for their 1.5-pound hamburger. It came impaled with a large steak knife. The knife was necessary, as Dagwood Bumstead couldn't have picked this thing up and eaten it. I am a large man, with large appetites; but I will admit to being a little intimidated by this titanic pile of food porn. I halved it, then quartered it, then stripped off the half-inch of onions, finally arriving at something I could fit in my mouth. On the second half of the burger I removed the bun, and just ate the meat. Dizzy with satiation, I paid the sixteen-dollar tab and headed back to my room to rest for a while. Here's the kicker: that was the "baby burger." There's a nine-pound version, with twelve slices of cheese and a head of lettuce. It's $49.99, but if you can finish it in 24 hours, it's free.

Later I went to Mermaid's, a cramped slots-only joint with a wicked bar. I had a 22-ounce Mudslide made with Everclear, served in a plastic mug the shape and size of a Nerf football. Again, I had overestimated my capacity for consumption. Fortunately for me, I am dangerous blackjack player, even drunk. I went back to the Plaza and hit them for another $375, with the aid of a Bushmills and coffee thoughtfully provided by the casino.

Had a VIP pass for Voodoo Lounge Tuesday night. I was there too early for the "scene" to develop, but I didn't want to be the "old guy at the club," as Chris Rock says. I swilled my nine-dollar Meyer's and Coke, shot some video and bugged out. Rio was hoppin' on a Tuesday night. But since I am not young, pretty, or rich, I don't belong there any more than I do the Strip.

It's not a Vegas trip until you run into a crazy person, and I did on my last day. While standing at a urinal in the Plaza, a thin, sixtyish man with a dish towel draped around his neck walked in and loudly asked, "Is this the Plaza or the Golden Nugget? 'Cause I got fifty thousand dollars right here!"

I whipped around to see him waving an envelope with the Golden Nugget logo on it. "Fifty large, huh? You normally announce that to total strangers?"

"I got fifty thousand in bearer bonds right here!"

"Have a nice day." I followed him for a while. He went to the McDonald's in the Plaza, apparently announced his largesse to people waiting in line, and then repeated the procedure at the bell desk. He wandered off through the casino; I hoped his day would not end with a fearsome beating, but I had a plane to catch.

Bottom line: I came home ahead $153.50 at the blackjack table, ahead $10 on slots, and full of rich, crazy memories. Gave most of winnings back to cabbies, bellhops, and waitresses, but not strippers. Not this time, anyway.

Roger Federer doesn't look like a god. With a mop of brown hair falling in all directions, he looks like the rhythm guitar player in a bar band, hoping to catch the overflow of girls from the frontman. But when a tennis ball comes toward him, he has more potential responses than any player in the game, perhaps ever.

Advances in racket technology and player conditioning have wholly transformed tennis as played by professionals, in the last fifteen or so years. It is no longer necessary for these players to "construct" a point as in the past; they simply try to blast an unreturnable shot the moment they get slightly out of position. For a while, the women's game was more watchable, but they have gone the way of the men, as well--three of the four Wimbledon semifinalists were six feet or taller.

Into this environment glides Federer. His movement is graceful, almost balletic. He can certainly hammer a ball, and will when the situation demands it; but seems to prefer strokes that resemble a gentle caress. His tennis vocabulary is a power of ten greater than his opponents. If the rest of the tour is Ozzy Osbourne, he is Nat King Cole. He routinely hits shots that would occur to no one else.

Watch Roger Federer at Wimbledon, or anywhere else you can. His surpassing talent may not repeated in our lifetime.